The Giants of the Strait, the Fin Whale (the second largest animal on the planet) making a huge spout when breathing on the surface; and the Sperm Whale that show its tail saying goodbye to tourists as if it were an obelisk in the middle of the sea.

It is a kind of semi-resident Strait of Gibraltar. Males can grow to 18m and 12m females. An adult can weigh 50 tons. They are dark gray.

It is the largest whale with teeth of the Earth. They are between 18 and 30 teeth in the lower jaw only and feed on squid caught at depths of up to 1000m . May be submerged more than 50 minutes. When will dive for food, bring to the surface its tail fin.

Adult males are usually solitary in their migrations and join groups of females for breeding season.

According to the IUCN (International Union for Conservation of Nature), the population of sperm whales in the Mediterranean is in danger of extinction and global situation is vulnerable, being solid pollution, noise and ship strikes their main threats.

The sperm whale has the largest brain of any animal can weigh 9kg and longer intestine where found squid to 20metros long.

The sperm whale, as cosmopolitan species, found in almost all the world's oceans. Both sexes have a very different distribution. Females tend to stay in warmer tropical and subtropical waters. Young males remain with females from the age of 4-21 years, which are separated and progressively moving to higher latitudes.

The sperm whale is usually located mostly in the deeper areas of the Strait of Gibraltar, where probably the largest squid, which feeds are located. 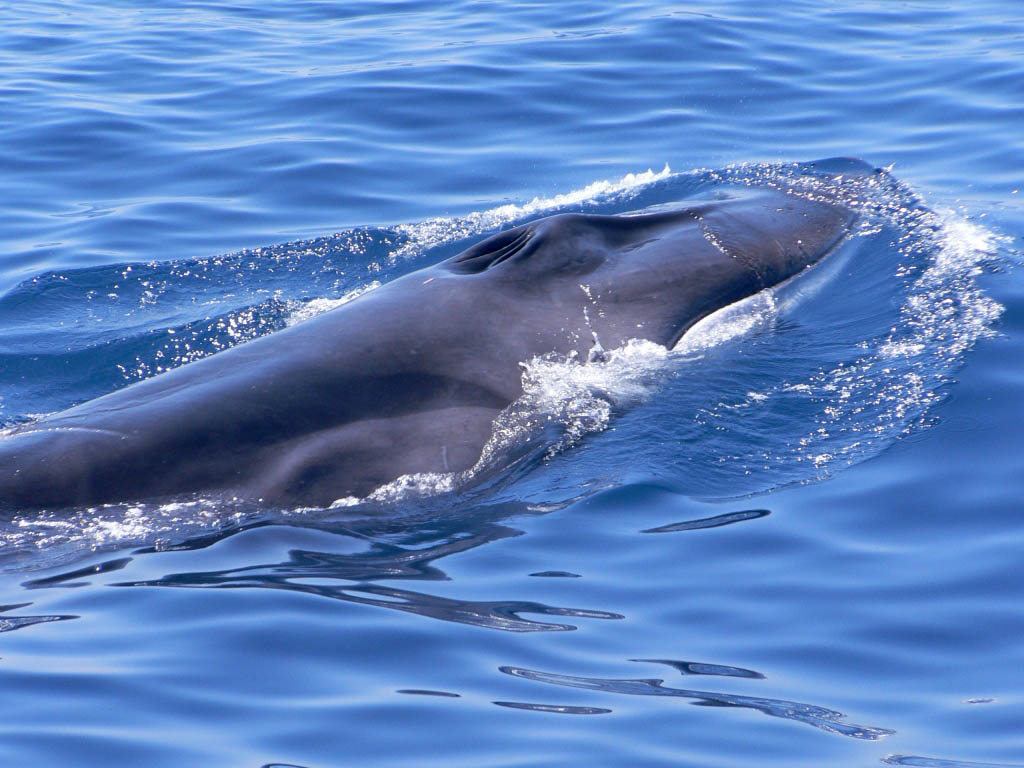 The Fin Whale is a non- resident of the Strait of Gibraltar species. It is the second largest animal on the planet after the blue whale. It can grow to 25 meters and reaches adult weight 75 tons. They have a streamlined body and can reach speeds up to 50 km/h. Its color is dark on the back and white underparts gray.

The fin whale is provided with 260-480 whiskers can grow to a meter in length. It feeds by filtering small fish, crustaceans and cephalopods.

According to the IUCN (International Union for Conservation of Nature), the whale in the Mediterranean is in a vulnerable situation and endangered globally.

They use the Strait of Gibraltar as a migratory path. When feeding can ingest 70 tons of water.

The fin whale is a cosmopolitan species found in all oceans of the world from Ecuador to the polar regions, but usually absent near the edge of the ice-covered areas.

The Mediterranean Sea is the most common baleen , and is present in deep waters far offshore , especially in the central and west.

In the Strait of Gibraltar are usually seen sailing the Atlantic in spring and summer, passing very close to the Andalusian coast, and in the opposite end of the summer and early spring direction, which may indicate that their migration patterns back to Mediterranean winter den.